On Friday I finally got around to playing with the bunch of foxtail grass I picked on my east coast sojourn. I’m sure you can guess what I wanted to create with them for my Garden Fairy’s Wardrobe!

They were more difficult to work with than I had imagined as they kept moving each time I tried to place another.

After mixed success I chose to do a bit of flower arranging instead.

Cathy from Rambling in The Garden‘s ‘In a Vase on Monday’ meme has prompted me to take the time to do so more regularly.

I find Seed Flora’s photos on Facebook inspiring – they are the team behind the spectacular David Jones Spring Flower Show which I posted about last Spring.

Their voluptuous and oversized arrangements with interesting and exotic mixes of foliage show you don’t need lots of flowers to create impact. But have a look at what they do with roses too it will make you swoon.

This was my Fridays arrangement. I have started keeping a few interesting shaped branches as they can come in handy when wanting to add some height.

On Saturday we had friends coming for dinner so I decided to do 3 more arrangements and I was pleased with what I could pull together from the winter offerings of my garden. 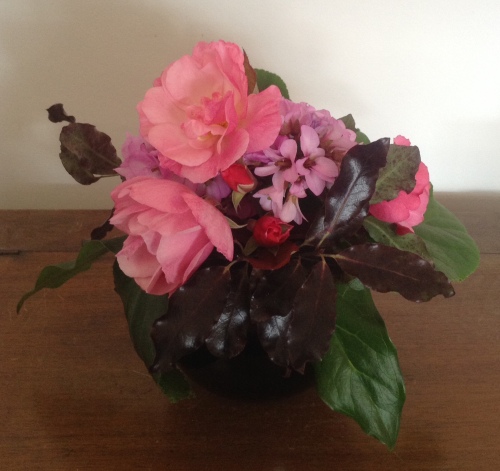 My Garden Fairy might need to wait for some alternative inspiration for a faux fur coat but she did get a stole and I think she would have been happy with that for her Winter Solstice celebrations.

And I’m looking forward to the longer daylight hours the solstice brings.