Some fashion collections stay with you long after the season has past and the designer has presented others.

It could be the silhouette, the fabrics or the combination of colours – which is what it was for me with Jean Paul Gaultier’s prêt-à-porter Pirate Collection from Spring/Summer 2008.

We were in Paris that Spring and went to the Gaultier boutique on avenue George V.
I lingered at the pieces that caught my eye to drink in the details and gently run my fingers over the cloth. Khaki, brown and olive green in plains, stripes and camouflage prints were given a touch of renegade luxe with the combinations of fabrics and embellishments.

This summer, while looking out my sunroom window down onto the plum tree and the ripening elderberries that memory was stirred by the similarity in colours and contrasting textures.

I pulled out the catalogue brought back from Paris to revisit the collection and was also inspired to design some plum leaf and elderberry dresses for my Garden Fairy’s Wardrobe. 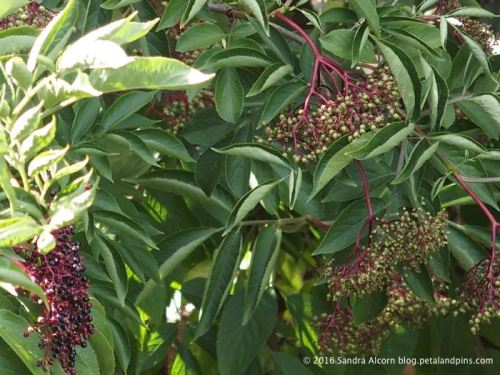 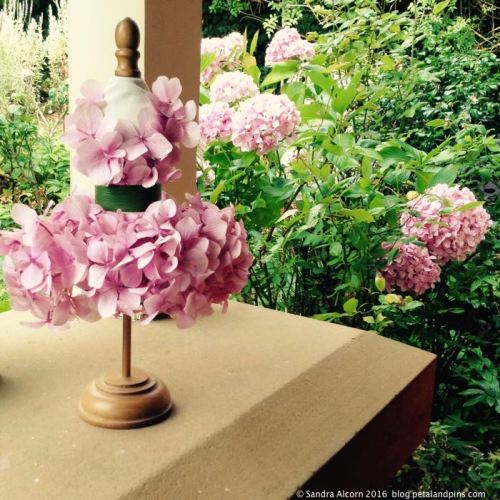 I had  planned to write about something all together different – I’ve had a post half written and something new from my Garden Fairy’s Wardrobe to share for well over a week… best laid plans and all that.

So it is just going to be short and sweet – a bit like this dress I created this morning on the miniature dressmaker’s stand that usually sits on my workroom mantle piece.

It’s a new year and I have a new vase, a Xmas present from Mr Petal & Pins!

It is by Tasmanian designer Sally Cassandra and features a striking imprint of lace that has been pressed into the surface and highlighted with black glaze.

It also has this interesting detail applied to the inside which makes it a striking object just on its own which is how I’ve been enjoying it displayed on the mantle piece since Xmas.

Yesterday we  did some pruning in the garden and with a few small branches of maple leaves too beautiful to just add to the compost pile I decided to create my first 2016 flower arrangement for In a Vase On Monday.

I picked hydrangeas and lavender growing by the front of the house, both are such a mass of blooms I will be able to have several vases full and still have a showy display outside. The last addition was a piece of trumpet vine – the flowers similar in colour to the hydrangea but a nice contrast in shape. 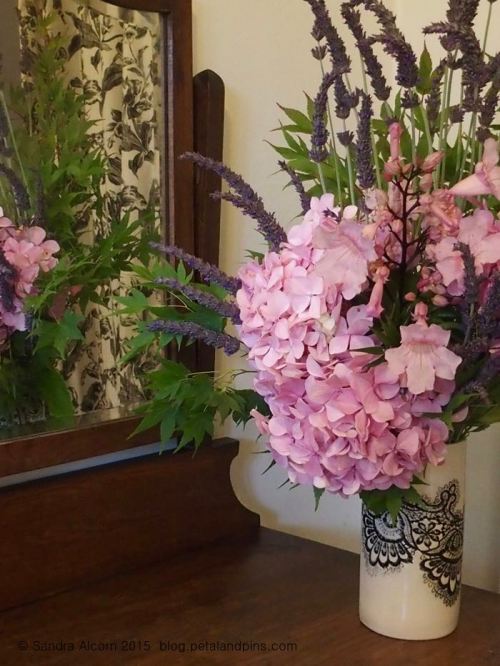 In a Vase On Monday was started by Cathy from Rambling In The Garden as a weekly ritual of bringing something from the garden inside no matter what the season – why not join in for 2016 – post a link to yours in her comments section or add #inavaseonmonday to your instagram pics.